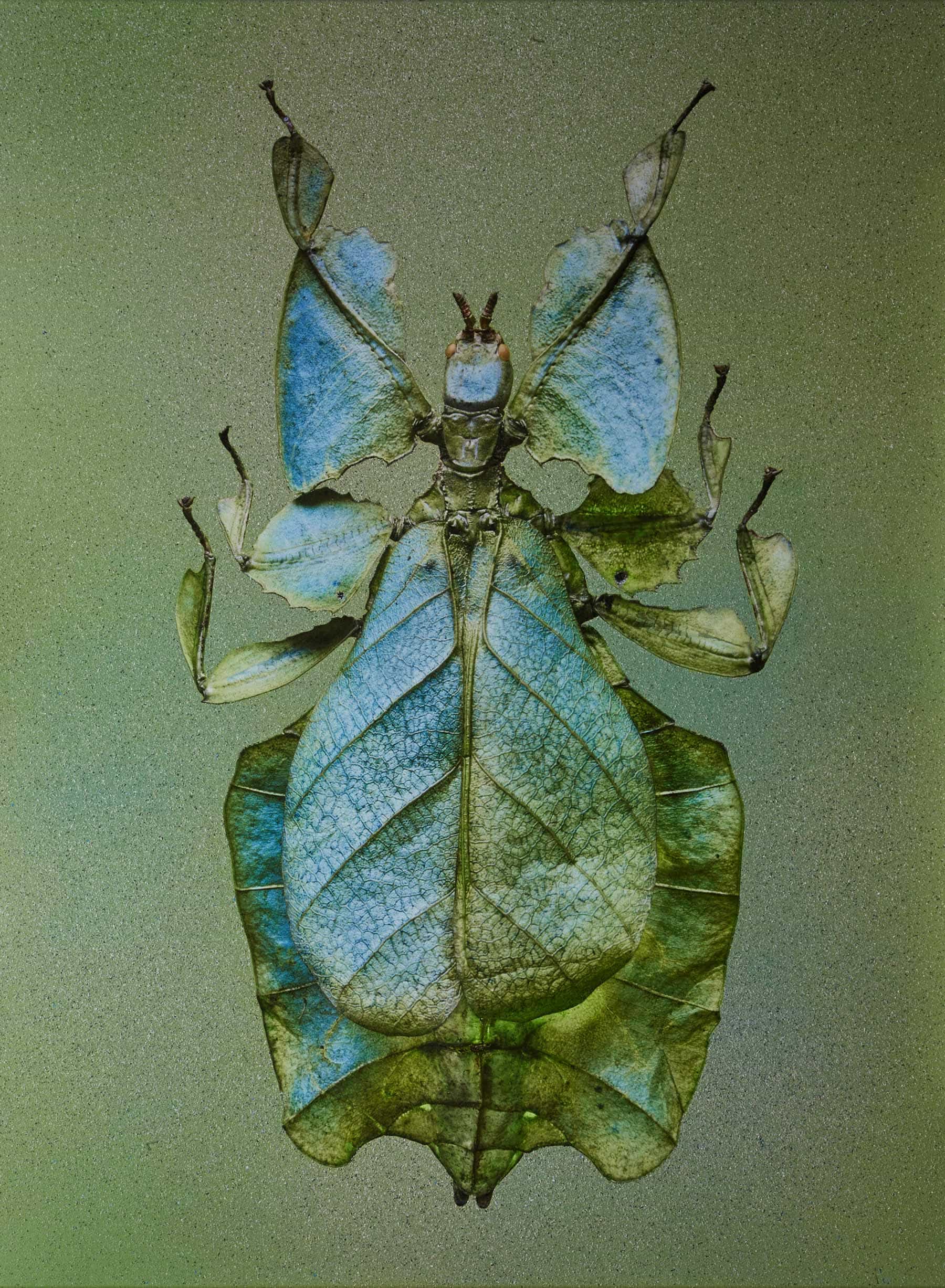 These surprising and impressive leaf insects have a green camouflage and appear as ‘walking leaves’. They live among cocoa plantations and are protected from insecticides. However, due to their extraordinary variation of colour in dotted green and yellow with brown or reddish dots, they are illegally collected and sold for keeping in terrariums. They have been collected for over 100 years and thus much is now known about their development.

They live in the tropical forests of the Seychelles and are now feeding mainly on plants which have been reintroduced. The effect of this diet change is not yet understood on their survival though the introduction of minor birds (Acridotheres tristis) has had an impact on their numbers.

The shape and size of these leaf-mimicking insects varies greatly. The female reaches up to 65mm-96mm, and the male is smaller at 45mm-69mm. The flightless females are beautiful leaf structures with hardened forewings with the pattern of the back of the leaf lying underneath on the smaller back wings. The males, which are much rarer, do fly and conversely have smaller forewings. It is a true spectacle witnessing their detailed movement in order to simulate a leaf in a wind gust or bush. This chameleon style of camouflage confuses their predators, while during the day they hang rigid like a leaf, so that even lizards believe them to be leaves. They are so adept at mimicking leaves that they sometimes confuse their fellow mates and take a bite!

The rarity is also related to the slow reproduction rate. The female lives about 3 months and lays one egg every day, sometimes two, so in her short life a total of 100 eggs that look like plant seeds are laid. Only after 5-7 months do the initially red-brown, wingless larvae hatch and climb up the tree with their abdomen raised until they reach the reddish, delicate leaves of the top shoots of the forage plant, often a cocoa plant. In Sri Lanka for example the plants are: Eugenia and Syzigium (myrtle plants). The reddish-brown young are hardly noticeable at the red-hued branch tips. After 1 to 2 weeks, the colour of the larvae changes again to yellow-green with brown spots. A colour that some adult specimens can have on cocoa trees. The appearance is then very different, some remain completely brown like a withered leaf, others have un-pigmented, transparent or rust-brown spots, which increases their ability to be unseen. A larva takes about 240 days to become a full insect. Parthenogenetic reproduction is also said to occur in these leaf insects, but apparently not over several generations. Even females of the second or third generation remain sterile.

Phyllium bioculatum is included in the Red List of Endangered Species of IUCN 2013.2 and therefore a catching ban has been issued. The numerous breeders across Europe sell the adult, which lives for only for a short time.